Earlier this month I had the great pleasure of giving a short 10 minute presentation at the inaugural event for PUNCS: Plymouth University Nineteenth Century Studies.

PUNCS is a fantastic new interdisciplinary forum through which researchers working on themes across the globe which speak to the long nineteenth-century can connect and discuss their research. In time PUNCS hopes to foster opportunities for collaboration and this was particularly apparent in the one-day conference event that I attended.

The last panel in particular, which looked prevalently at the methods through which every day offences were reported between 1880 and 1920 demonstrated strong links between people’s research topics as well as the overall potential that collaborative projects hold.

My own talk was titled ‘Canine Character: Reading the Dog in Victorian Visual Culture’ and briefly addressed some research points that have interested me recently. In particular I have been interested in exploring the impact of the dog fancy when it came to canine visuals and the notion of ‘reading’ a show dog for its aesthetic appeal. The impact of this move towards canine connoisseurship, I propose, had significant implications concerning how audiences consequently came to view dogs in imagery. The potential construction of a readable canine physiognomy and/or phrenology and the subsequent implications of such are of a particular interest to me.

The rest of the talks were intellectually rich and impressively diverse, including a talk on the reception of Vasari’s Lives of the Artists in mid-Victorian Britain by Dr. Jenny Graham, a reading of Plymouth’s own Cottonian Collection by PhD researcher Susan Leedham, an exploration into the theme of Mercy by Dr. James Gregory, and some insights into the lives of the working-class female when it came to Mechanics’ Institutes in Victorian Britain by PhD Researcher Doug Watson.

If you would like to know more about PUNCS then I encourage you to go and explore their site. No doubt there will be more engaging events upcoming. 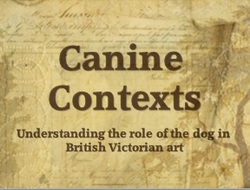 Theme: How the ‘arts’, and the way they have been studied over time, offers an insight to societies of the past and present.

Title: Canine Contexts: Understanding the Role of the Dog in British Victorian art.

This paper aims to explore one seemingly unassuming, element within Victorian visual culture; that of the dog.

Using the painting Work (1852-65) by Ford Madox Brown (1821-1893) as a case study, this paper will demonstrate the significance that social and cultural contexts played within the placing of the dog in both fine art works and other visual mediums of the Victorian era. Looking at a multitude of issues; from pet keeping and dog shows to dog thieves and ‘mad dogs’; each dog within Work shall be explored and elaborated upon within this paper, including the widely unmentioned or unnoticed ‘fifth dog’ in the artwork.

Through this, visual representations of dogs within Victorian visual culture shall be argued as adding a canine context to artworks of the time; reflecting wider issues such as those of class, human identity and the crossing of public and domestic spheres, and contributing to a more profound understanding of the artworks they occupy.

The eventual realisation that viewers should gain by the end of the talk is that not only are representations of dogs within Victorian art significant, but they are also dependant on an in-depth understanding of the historical, social and cultural contexts within which they were produced.

My poster in situ.

For my poster I chose to highlight the sources which an undergrad might consult as part of their research. The idea of the posters was to keep them short and simple, so my sources took the form of a list.

The final drafts and design of my poster was undertaken by a design student and I was blown away when I saw the final version. I truly am grateful to have been given such an opportunity and to have been able to show how much hard work goes into research (even at undergraduate level).